The Old Man and the Sea

Let’s start with an little of Hemingway’s “The Old Man and the Sea” before we go into the drink.  As some of you might remember it started as a story of an unlucky old Cuban fisherman’s life until he finally catches and eventually wins the battle with the marlin.  Then the defeat as the sharks eat away at his prize catch.  Only to have recognition for the great feat in the end as he drifts back to sleep dreaming of lions playing on the beach in Africa.

However, this is not Hemingway’s book but a rather tasty drink that we are discussing here today:

How to make the drink:  The Old Man And the Sea

3.  Dust ice with fine zest of lime to taste

5.  Top with Squirt or Fresca

6.  Garnish with a twist of lime 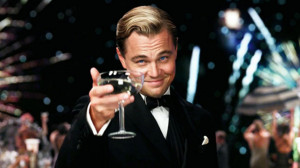 The Old Man and the Sea Party

You can always replace the crystal low-ball glass and the sterling silver drink mixer – it just isn’t the same.  Not even Sure that the result could be called The Old Man and the Sea … 😉

Consume respectfully.  Never drive or operate heavy equipment while under the influence.

You must be logged in to participate in chats